HomeFeaturesRunning a Topshot on Your Fishing Reel
FeaturesHow To

Running a Topshot on Your Fishing Reel These days, plenty of anglers are spooling up their reels with topshots—on trolling reels, bottom fishing reels, and spincasting reels. So, what is a topshot, and when should you consider employing one?

What is a Topshot?

“Running a topshot” is the term used to describe a combination of braid and monofilament line spooled up on the same fishing reel. Typically, the reel is first almost fully spooled with the braid line of choice. Then, a much shorter section of mono is attached with a line-to-line knot. You’ll need to learn new knots to run a topshot, but the advantages are numerous.

This technique allows the angler to gain the benefits of both braid and mono line on a single reel. One of the obvious ones is line capacity. Braid is much thinner, so you can fit a great deal more on the reel. However, braid lacks stretch and abrasion resistance—qualities inherent to mono line. Therefore, a short length of mono after your braid allows you to get the best of both worlds.

Braid has a much longer lifespan compared to mono. Mono breaks down in the sun or can develop “memory” from being wound too tight for too long on a spool. Anglers who fish often should respool their mono reels every season. Braid can last years if it is not physically damaged though abrasion. By running topshot, only the first few hundred feet of mono line need to be changed out. After all, only the first few hundred feet of line do most of the work. So, if damage is suspected, simply replacing a short length of line is much easier.

When adding a topshot to a salmon trolling reel, the reel is generally first almost completely spooled with 50- to 65-lb braid. This may seem to be a bit of a heavy test, but the larger diameter of the line makes tying on the topshot easier. Then 30′ to 50′ of 30-lb mono is added. It is important to add enough mono that it will reach the downrigger release clip.

For trolling, the additional benefit of a topshot is the reduced drag of the braid line. As braid is much thinner for the same (or greater) pound test, it cuts though the water more effectively. This reduces line creep and allows the fishermen to troll deeper. Since trolling beyond 200′ is common in the Georgia Strait, this is a significant advantage. But braid line tends not to be compatible with typical downrigger release clips, so having enough mono to clip into the release is critical—few things are more annoying than line constantly slipping out of the release clip. The mono topshot can also help by working as a shock absorber for playing a fish. Fighting an acrobatic salmon with straight braid is very challenging.

Braid line has been common in bottom fishing for a while. A short, heavy topshot protects the main line from rocks and sharp-toothed fish such as halibut and lingcod. Braid is also very difficult to snap when snagged. Having an equivalent strength or slightly weaker mono topshot allows the angler to break off his line more easily while leaving enough braided line on the reel to keep fishing. Again, the angler can easily tie on a short topshot to the main line and keep going. Generally, the topshot for bottom fish only needs to be a few feet long—just enough to keep the line away from the fish’s teeth.

For spincasting, the advantages of topshotting mono on braid are profound. Running 30-lb braid on a small spincasting setup allows one to cast much farther than the same reel with 20-lb mono. Tie on a short topshot of mono to that braid and one gets the best of both products. Capacity has always limited the use of spincasting reels for salmon. But since braided line is so much thinner, it obviates that issue. The short topshot also gives the required stretch to fight a large salmon. The length of the topshot for spincasting only needs to be about four feet long—preferably short enough that the knot is not running through the rod eyes with each cast.

For tuna, the length of the topshot will vary for different species. A very long topshot of up to 100 yards is not uncommon for larger tuna such as yellowfin. For smaller albacore, however, a short topshot of 25′ is often sufficient. Also, many anglers employ their tuna rod for the dual purpose of halibut fishing. Simply changing the test of the topshot allows them to change over their rod quickly to whichever species they are targeting.

To attach your topshot, you will have to master a line-to-line knot. There are many to choose from that will work. The Crazy Alberto is generally considered one of the best. It is not the easiest to learn, but makes for a very small yet strong knot. (It helps, if you have three hands or extra fingers.) The Albright, nail, or Bristol knot will also work, but they are not quite as strong. Some people just use their normal fisherman’s knot and add a small swivel to connect the two types of line. This will work for the shorter topshots on spincasting or bottom fishing rigs, but not for longer ones such as for salmon trolling. 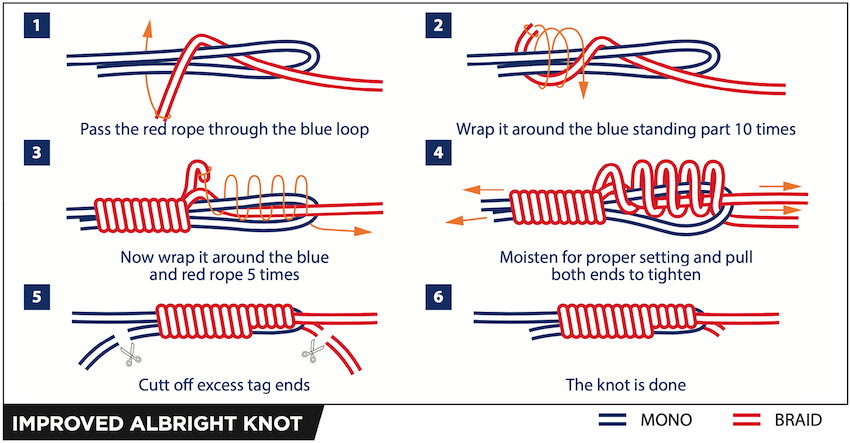 So, start practicing your knots and get spooled up with this new way of fishing. It will let you be more effective at whatever types of fishing you enjoy.

A short length of mono after your braid allows you to get the best of both worlds.