Salmon Lures: What Colour and When? 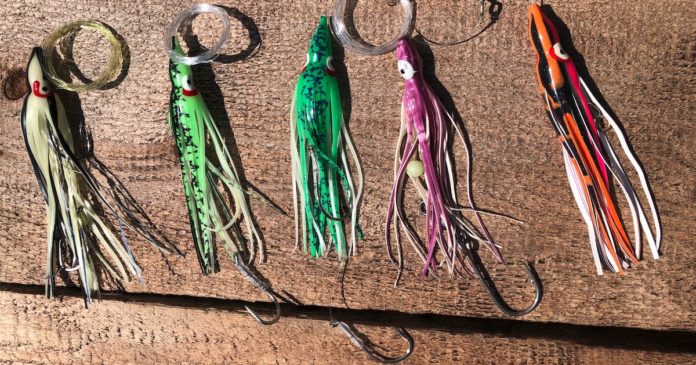 There are many seasonal cycles that affect Chinook fishing. One that gets less discussion than perhaps it should is the regular seasonal progression of which lure colour is most effective. Many anglers, myself included, get in the habit of using the same colour patterns throughout the year. And while there are always exceptions, I have noticed a fairly consistent yearly pattern in Chinook’s preferred lure colour. I suspect these changes are due to the other seasonal cycles that affect the salmon, including how deep the fish are, water clarity, how close to spawning they are, and even what colour the salmon is as it nears its final destination. However, despite many attempts on my part, no salmon has as yet ever been willing to confirm any of my suspicions.

For an in-depth article on colour depth penetration, click here or on the chart below.

Winter is a time of cold, clear waters with excellent visibility, so your gear is visible from a great distance away. While the salmon are normally very deep, in the clear water you can run non-glow gear if the sun is shining and light is penetrating the water. I use white spoons and white hoochies with an ultraviolet coating such as White Lightning.

I will also use Glow White, or a Cop Car-pattern spoon if the sky is a bit darker and/or the fish are particularly deep. A green glow stripe on white, such as with the Irish Cream spoon, also still works at this time.

In the spring, the fish are normally running very deep and just beginning their long journey home. Increasing sunlight causes plankton and algae levels to rise, with a corresponding decrease of visibility at depth. Therefore, I tend to look for lures that are highly visible in such conditions. Typically, this means glow flashers and chartreuse-coloured lures. Admittedly, I used to think chartreuse was one of those imaginary colours that only women can see, like maroon or teal. But it turns out it’s real and a sort of bright yellow/green mix that can be found in spoons such as Mongoose and Yellowtail (also called No Bananas) or with T-Rex hoochies. I use chartreuse/glow flashers as well. I believe chartreuse is the most visible colour in poor visibility situations.

In early summer, the water clarity is still low, but the Chinook start moving into shallower water and closer to shore and structure. As soon as the fish reach this point, I begin using more chrome and bright green lures. I call this Heineken green, as it matches the colours on a can of Heineken beer. And yes, I have certainly seen a can of Heineken cut up and used as an effective spoon before.

Another staple would be the basic green splatterback hoochie. The fish themselves are still bright, with a dark green back and chrome sides. At this point in the season, I start to use flashers that match the colour of the salmon itself and continue to do so until the fall. This is because it’s my current belief that the flasher is perceived by the salmon as another salmon trying to catch the lure. I used to believe it represented a bait ball and the lure was the slow herring that can’t keep up. However, after watching a lot of underwater footage, the flasher looks, at least to me, just like a salmon slashing at a baitfish. Therefore, the most consistent flashers would be Green Blade Mirrors, Green Blade Moon Jelly, and even the old original Hot Spot Green Chrome.

As summer progresses towards autumn, the colour changes begin to happen more rapidly. At a certain point in August, the salmon themselves begin to take on a slightly darker hue—not yet spawning colours, but an in-between colour. This is when I pull out my Purple Onion and Purple Haze flashers and hoochies. This is when I also start to use one of my favourite Silver Hoard spoons called Resurrection.

It has caught many of my large, late summer Chinook. It’s an uncommon and rather goofy colour pattern, but it seems to consistently work for me at this particular time of year. After few weeks of this, I add gold or brass-coloured lures and flashers to the mix. I continue to use purple, but the amount of gold steadily increases until the fall rains come and the salmon can migrate up river. Now at the end of the salmon fishing season, truly garish colours seem to be the best to use. My go-to pattern is called Halloween. This is a spoon or hoochie that is half bright orange and half black. Also, large plugs seem to work well at this time. I suspect neither of these types of lures are replicating baitfish, as by now the salmon have basically stopped feeding. Instead, I think they are biting bright orange as they associate it with another salmon’s eggs. Salmon in the river are certainly known to consume salmon eggs. A possible explanation for this practice is perhaps not nutrition, but improving opportunities for their own eggs. Similarly, while not food, the plugs may represent trout, who also prey on salmon eggs and to whom the salmon react aggressively to in the river.

There are still many daily variables in which colour is best. But I find the above seasonal pattern to be consistent, and it gives the fisherman an idea as to which lure to pull out of the tackle box on any day, even if they have no other local reports. Sometimes the fish don’t stick to the program and have their own ideas as to what looks tasty. It’s always best to change your gear regularly if you are not getting hits but fisherman around you are.

And as an experienced fishing tackle salesman, I should point out that the most important thing is to have two of every lure that’s available for sale. Actually, maybe three, just in case you lose one…

Why Use Squid & Cuttlefish Hoochies for Salmon Fishing?