HomeHow ToStacking Fishing Lines Like A Boss
How To I usually fish one line to a downrigger, but there are times it is useful to stack two lines. Occasionally one downrigger will have mechanical problems, or you will lose a cannonball and not have a spare, and will be forced to stack lines on the remaining downrigger.

The downrigger release clip itself often slips on the braided downrigger cable. I usually put one Scotty stopper a few inches above the release clip and another below to fix it in position.

If the strike is on the lower line, sorting out the gear can be tricky. Sometimes the fish will run clear and everything will be fine, but expect that often it will be over or under the upper line. That’s not a problem; just let the salmon run while you sort out the second rod.

And sometimes stacking lines works out well. A few years ago, I was guiding at a lodge on the central coast, and when I set the gear in the morning found that one of the downriggers was dead. It couldn’t be repaired on the water, so I stacked lines on the other downrigger. Shortly after we started fishing we hit a nice spring on the bottom line of the stack. While my guest was fighting that spring, I asked the other guest to bring in the upper line, but he couldn’t get it off the release clip. He tugged and tugged and was getting really frustrated; then I noticed that the release clip was tugging back. It turned out to be a second spring that had already taken the line off the release clip (the guest had inadvertently done a fine job of setting the hook repeatedly), and the salmon was 29 lbs. Two hits and two salmon in the boat—a dead slow morning but my guests were happy. 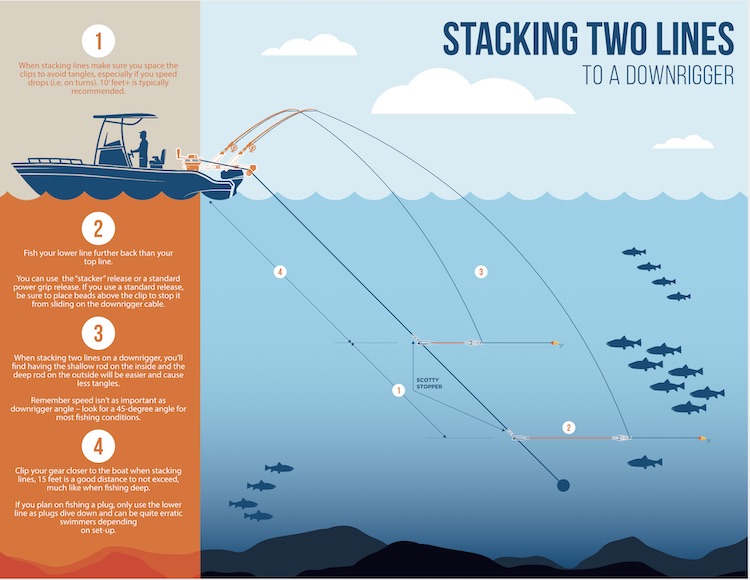 Stacking is also a good method when fishing very deep and there is the possibility of the two downriggers tangling when the cannonballs swing from side to side like long pendulums. In this case the second downrigger is stowed and both lines are stacked on a single downrigger.

Bill Haymond is the author of “The Science of Salmon Fishing”, which is available at www.thescienceofsalmonfishing.com.